This month has seen much rain, and, inevitably, MUD! We’ve had some great team and individual results in the Red Rose Cross Country league, with its climax at a typically muddy Marl Pits. Read about Jack Villiers’ individual success below.

The Tour of Pendle seems to have divided runners into those who loved it and those who, er, didn’t! Again, there’s a couple of race reports to illustrate the difference.

Unfortunately, with the start of December being so busy for all our team, this edition of the Roundup is shorter than normal. Please consider writing for the next edition, maybe as you wake up on New Year’s Day (optimistic I know). All contributions to roundup@claytonlemoors.org.uk.

It just remains for me to wish all our lovely Orange Army a very Merry Christmas and a Happy Healthy New Year!

First of all I would like to say a massive thank you to my mum and dad,  Phil (my coach) and everybody else that has helped me achieve 2nd under 17 male in the Red Rose Cross Country League.

The start of the Red Rose Cross Country League is Leigh, which is flat as a pancake. I placed 6th, the U17M team 2nd – for me at this point I was just wanting to medal as a team, and thought medalling individually was highly unlikely. 2 weeks later was Bolton, the most eventful of the four in my case. Half way round the course is a water crossing, where I decided to take a dip in the water which was unbelievably cold! 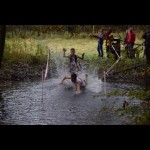 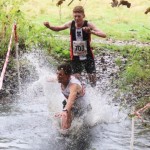 Jack taking a taumble in the freezing water at Bolton

I finished 4th at Bolton and the team first. Todmorden was now up on the Red Rose Cross Country list. The course had to be changed because of the amount of rainfall, so it was quite muddy. I finished 4th as in the previous fixture and the team finished 2nd behind Horwich.  At that point I thought I was still unlikely to get an individual medal.

Last of all my favourite race  – Marl Pits. Going into the final race I still thought it was highly unlikely of me medalling individually. It was not until about halfway round my dad told me I had to keep 2nd in order to place 2nd overall in the Red Rose Cross Country League. Coming towards the end of the race, whilst being chased by the other competing athletes, I really had to push myself in order to achieve 2nd.

Overall, I’m really I’m proud to have come 2nd overall in the League and really proud to be part of amazing team, again finishing 2nd.

Enjoying your health and fitness

I have always considered myself very lucky with regard to my various sporting activities, I have managed to be injury free all through my football career to when I finished in my late forties, and when I took up running, I only had the usual little niggles, which were usually easily shaken off or forgotten after a pint or two after the race.

However, the Ribble Valley 10k, on New Years Eve 2016, proved a turning point for me, I ran a PB of 48.44 but woke up the following day in all sorts of pain around my hip area. It eventually settled over the next few days and I continued running in discomfort for the next 18 months, having lots of physio between races.

Eventually, with my racing getting slower and slower and with my running buddies Lucy, James and Donna giving me loads of grief at training, I decided to see a consultant. The verdict in January 2019 was Rheumatoid Arthritis in both hips and they would both need replacing over a 12 month period, and the final insult from the consultant was that I would not run again.

Now for someone at 57, having had a pain free sporting career, this shouldn’t be the end of the world but I was devastated by it. Running was where I cleared my head, it was where I met like minded people who were just brilliant and who every week helped me get over the pressure of work with a pint after training sessions.

On April 5th 2019 I had my left hip replaced and had six weeks working from home before getting back to the office, by three months I was jogging and did my first 5k in August. Please don’t tell my consultant, I tell him I am doing lots of cycling!! Whilst I will never be the same international athlete I once was, (no cheeky comments please) I can at least attend training and do Burnley Parkrun, which allows meet to meet up with all my fellow athletes and catch up on all the Clayton chat.

Ian with James and Lucy

I am due to have my right hip replaced in 2020 and am confident I will be back running again after that. Watching all the progress of our fabulous juniors and our amazing Cross Country and Fell and Trail runners will keep me focused whilst I recuperate.
So, all I would say to you fellow athletes is, enjoy every run as if it is your last, as you never know what is round the corner, and the gift of being a Clayton Club runner is one to be cherished.

The Myerscough 10 Mile road race was a well organised and enjoyable event to start December off. An early start, 10am, took us a long quiet country roads with a good touch from Jack Frost. Careful treading made sure the runners had to take extra care.

But the frost didn’t appear to cramp our style. Fellow runners from Clayton and clubs far and wide joined in banter along the way which helped to make the miles go by and before you knew it the last mile marker appears.
The route was well marshalled with plenty of support along the way. A definite recommendation for 2020 with a prize for everyone at the finish, Lancashire cheese. 😊 Alex Braysford at Tour of Pendle

Well… this was my first longggg fell race after the foot fracture and I absolutely loved it! After the first climb it was pretty flat in the first 8 miles, but then that took a massive change – well Hello Hills!! 3 peaks here I come!! And – bye Cassie,as I lost her (ooops) sorry, I got carried away again up the climbs and on the descents until I got back to the trig with no one in sight. I nearly went the Pendle Fell race route so decided to wait for a few runners to arrive just to double check I was going the right direction, before taking on the final decent off Pendle and back into Barley, loved it will definitely do it again next year. Michelle on the Tour of Pendle A look at our runners’ latest PBs at our local parkruns.