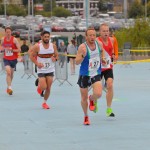 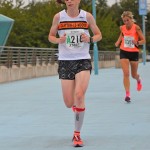 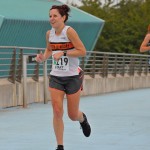 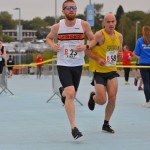 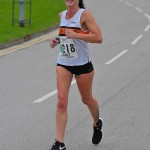 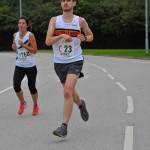 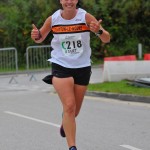 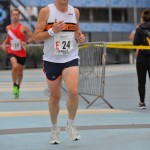 There are not many opportunities where you can watch and run against some of the best runners the North of England can offer or in the same stadium that will hold the British Athletics Championships next year but the Road Relays is one of them.  Yes it can be intimidating lining up against some of these athletes but it’s also a great chance to test yourself plus there’s a fantastic atmosphere inside and around the stadium.  We had 2 men’s teams entered this year with a mixture of a few who had been here before and a number of first timers which is good to see.

Well done to all that ran and I look forward to seeing you and hopefully a few others at the next road relays.

As someone who didn’t start running until her mid forties, and who isn’t a particularly confident, or ‘fast’ runner, being part of a team at the Northern Athletics Autumn Road Relays was a daunting prospect, however I’ve learnt since joining Clayton to just have a go.

The event was at Sport City and involved running two laps of the Etihad Stadium, a detour into the car park (a longer detour for the men) and two laps of the running track, working out at just over 6 kms for the ladies. I arrived just in time to see one of the Stevens boys running his leg (sorry I still can’t tell you apart), the two of them along with Alfie White making up ‘the dream team’ as they were accurately described later.

As usual before a race I was nervous and feeling sick, it didn’t help that I was leg 4 of 4 in my team meaning I’d have to hang around until my three teammates had finished, looking round at the other competitors I also started to realise that I was at the older end which could realistically mean that I would be the last female runner on the track (fortunately there were 6 in the men’s teams meaning they’d finish after me)!

Once the senior races started though my nerves began to calm as I was distracted looking out for our runners to cheer on, warming up, being instructed in how the pen system worked, where to queue waiting for my turn and trying to work out the map of the route.

I’m never going to win anything (apart from Millom parkrun…), but for me the biggest and best part of taking part in anything like this is wearing my vest and the team atmosphere, everyone is always so supportive.

Rebecca Rimington from our ladies A team, along with Donna Airey from my team were the first to set off, Michelle Abbott and Julia Rushton were both on leg 2 followed by Cassandra Smedley and Jane Hylands on leg 3 then finally Janice and I were able to set off. Janice set off a few minutes earlier than me and because of the layout of the course we were able to encourage each other a couple of times on the way round (I actually couldn’t speak whereas Janice was very vocal – thank you!). I was also cheered on by some of our senior men, a couple of the Trawden men who passed me, Cassie, Michelle and children had hung on to cheer me on as they were leaving and our team cheerleaders back in the athletics stadium.

The layout of the course on the map looked complicated and I was worried about not knowing where to go, I needn’t have worried though as it was fully marshalled and signed. I was happy with my time as it was close to the fastest pace I’ve ever run, despite a summer of too much food, drink and lying in the sunshine, and bonus our team didn’t come last and I wasn’t the last lady!

The highlight of my day though was hearing Julie Bradshaw shouting my name from across the athletics track, that got the biggest smile from me! Julie is such a massive part of our team, she’s always there at almost every run I do, and parkrun, cheering everyone on and it does make such a difference.

Thank you Team Clayton and our band of supporters for a fab day out, and for continuing to build my confidence – and if you’re reading this and have never done anything like it – put your name forward next time!

Let me start by being plain: I am not a runner. I never ran at school, I’ve never been one for exercise in general, I’m more adapted for comfort than speed. However, about 5 years ago, I’d driven through Towneley Park enough times when Parkrun was on and never seen a “larger” runner, so convinced myself that the way to a svelte figure was through running. So I’d give it a go.

Firstly I tried Couch25K, on a treadmill. I got to about 10 minutes of solid running before I convinced myself I couldn’t do it. I tried a couple of parkruns, in the cold wind and rain, and gave up. Then I found a free book called Beginner’s Luck, with a free running programme to try. The book works on your head while the programme is much easier to follow. This worked, and soon I was back at parkrun, getting faster. But still not looking like the stick I expected to transform into (I’m still waiting).

It must have been around this time that I persuaded either one or the other twin to jog round parkrun with me. I think I managed running alongside one for a short period before they were off. And that was the start of their running journey. Whereas I was beset with a recurrent Achilles problem, due to (according to the twins) my useless form. I’ve had a suitable amount of poking and prodding by sports therapists, and found the solution in Dave Edmondson’s magic Pilates class, I’ve now had no problems for a year.

I persuaded, OK, forced, Rachael White into doing to Burnley 10K with me. We trained separately, then together, and in her I’ve found a wonderful running friend. Burnley 10K over and done with, I half suggested cross country to Rachael as a joke, then found myself promising to do at least one this year. Eeek. I’m driving Peter and Michael to the fixtures, so I may as well join in, right?

Leigh was the one I was aiming for, flat and just 5k. But Ulverston came first, I thought I was reasonably ready for it. I knew I was going to come in last, and was only bothered from the team’s perspective, not my own. I asked the twins about the course, if they thought I would manage it. And here comes the lesson:

That’s what they told me, and looking at it from the playing field, it didn’t look much of a hill. So, attired in my new trail shoes, Clayton vest, and race number (!) I thought I was ready for anything. Nervous, but ready. I got called a hillbilly in the queue for the loo. How rude! But I think the lady was referring to Clayton’s reputation on the fells, rather than for a lack of sophistication on my part. I think.

The ladies of Team Clayton have been so supportive and lovely, they really helped me get to that start line and off, with the promise of cake at the end. I don’t think Donna said her immortal words to me (“don’t be shit”), but I managed to be pretty rubbish anyway. I’m not used to mud, my shoes made my feet hurt (a bad workman always blames his tools), and that hill….. if they’d told me how many times the course went up and over it, I probably would have skipped the race altogether. Making it to the top. Again. Photo by Dave Wood

Nicola Moynihan’s mum, Pat, chivvied me along, up the hills, and along the tops, down again and through the mud. (The views over Morecambe Bay are pretty spectacular from parts of the course.) I couldn’t NOT finish, and with Julie Bradshaw’s voice ringing in my ears (I think she spotted me on top of the last hilly bit and bellowed at me) stuck it to the end, and felt glad I did. I got hugs from people I didn’t know even, and I felt on top of the world.

And I wasn’t last.

What I have learned is that I’m not as fit as I thought. It’s very hard to run through mud, it tires the legs. Running with your team mates is ace. Cassie makes great cakes. Don’t run in new shoes. Cross country is great fun, even if it’s hard. And it’s much better to run it that stand around watching it.